LESSON 1: AN IDIOT’S GUIDE TO SLEEPING OUTSIDE THE WOMB

Babies wake up during the night because they are babies and it is what they do. This is a fact.

Yet, so many proper grown up people who have been to school and everything, some who have even written books about babies will not accept this.

They try and work out how to fix us when in actual fact we are just BEING BABIES and sleeping outside of mummy’s womby palace kind of takes some getting used to..

Ok, sure, sometimes we are teething, have wind, reflux or feel a bit peckish but a lot of the time we wake up because we don’t want to be asleep. We want to see mummy and daddy to check they’re like, still alive and stuff.

So next time your baby wakes up at night (sleep is for the weak) consider these things:

Parents love to blame stuff on teething. My mummy often tells people I am teething when really I am just being a dick. Click To Tweet

So when I wake up at night – Daddy and Mummy often spend hours having the ‘is she teething’ discussion. And then they wonder why they’re tired in the morning! I don’t mind though as it always means I end up getting  a spoonful of delicious sweet pink stuff ‘just in case’.

Therefore, in the hope we’ll be so full up we will sleep all night long, they feed us loads all day, before bedtime, during bedtime, do a ‘dream feed’ (which is a bit like someone sticking a sandwich in your face when you are having a nap).

However, the only way to guarantee milk will make us sleep is to slip some whiskey in it.

Parents often believe that babies cry at night because they need to be with them 24 hours a day. (Bless..) But sometimes we are just bored shitless. It’s not like we can read a book or go clubbing Crying is all we got.

And the only people who can provide company or a slither of entertainment during the twilight hours are our grown ups.

So we stick our bottom lip out, hold our arms up and scream and we get a grown up to play with in no time. 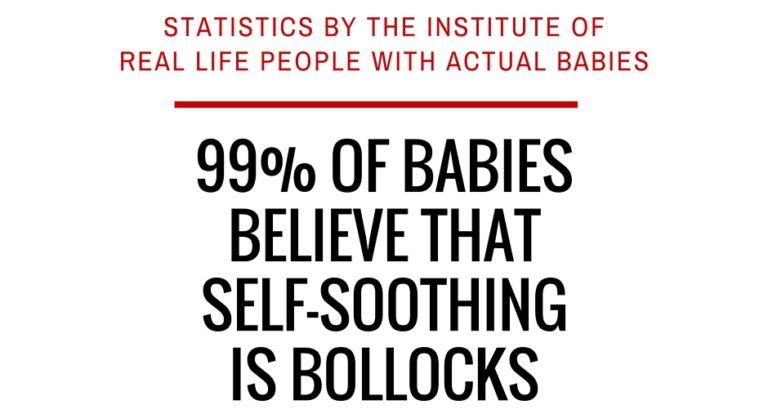 Don’t be an idiot…

Right, I’m just going to say it. Parents. Are. Idiots.

For example, this one night I woke up at 4am.

It was dark, I was alone, a bit scared and I really fancied a cuddle (hey, I am a baby for god’s sake). So I did a little cry, all confident Mummy or Daddy would come and deliver a hug and make me feel better.

I kid you not, people. Lots of time passed, then lots more time but there was still no sign of my parents. So then I started getting upset for real.

By this time I was actually hysterical. Well, wouldn’t you be? As far as I was concerned, I was now an orphan who was going to be trapped in a cot prison forever, drenched in my own feces and urine. The nappy rash alone would be hell.

Thankfully, a few seconds later my parents burst into my room looking like hell! I think Mummy had been crying.

Oh man, what’s happened to them? I thought. It must be something bad, really bad.

Then her and daddy started shouting at each other. Daddy was saying something about mummy ‘making a rod for her own back’. (Which if you ask me, sounds like a really weird thing to be doing at 4am. What is a back rod anyway? Grown ups are odd).

Anyway, then they start saying it is all their fault that I don’t sleep through the night because they always comfort me when I wake up.

BUT I WAKE UP BECAUSE I NEED COMFORT! I want to yell at them but I can’t on account of being a baby so I have to go with WAAAAAAH instead. 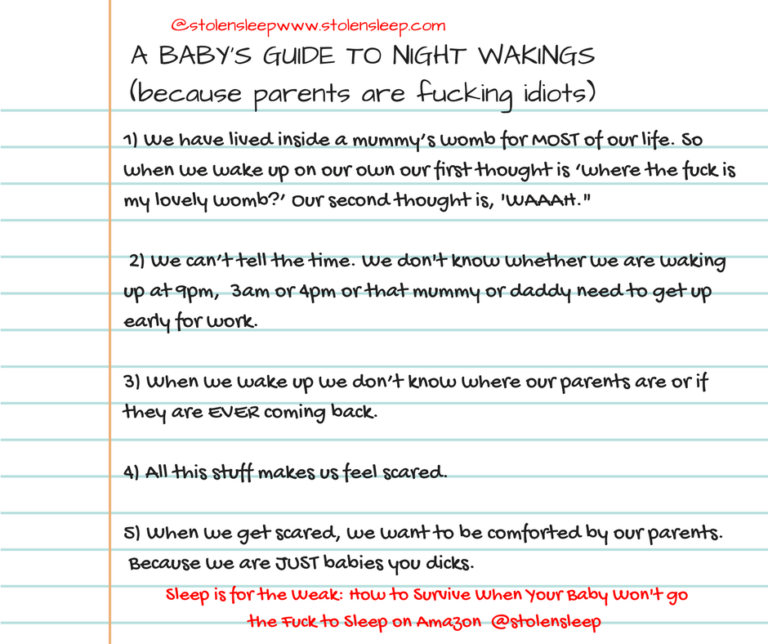 A quick memo about night wakings for idiot parents

Where was I? Oh right, so at this point things got really heated.

“Here,” he announced triumphantly.  “Google says babies should be taught to Self Soothe and what’s more, they should always be put down in their cot when they are drowsy but awake.”

I have no idea who Google is but he sounds like a right wanker.

So then Daddy started doing this really strange thing where he would give me a lovely snuggly cuddle but just as I got all comfy and drowsy, he’d pull me off him and place me in the cold, dark cot prison. Then he’d look all surprised when I screamed my head off. Like I am the weirdo!

ME? That’s rich. I just wanted a little cuddle and they bring all this shit to my door.

So parents, do not be idiots. Give your baby what he wants. Even if what he wants is just you.  It is not like it will last forever or even for very long. Just until he realizes that Outside The Womb is not as scary as shit after all. 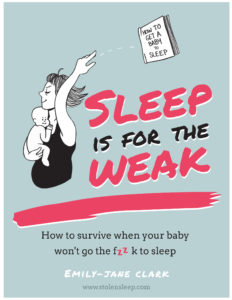 This is a guest post by the fabulous Emily-Jane Clark from StolenSleep.com, author of Sleep is for the Weak. Check her out on Facebook.

I’m all for keeping them enclosed as long as pos