“Rachel, it’s time. You need to learn how to talk to guys and flirt again.” – Marni

“Just go for it, you’ll have fun and it will be a good ego boost.” – Amanda

“You should definitely do it, but can I PLEASE make your online dating profile.” – Jenni

All of the above were real statements, made by real friends, telling me the mourning period was over and it was time for me to move on.  I had been separated for a while at this point and they thought it was time to launch me into the dating scene.  I wanted to launch myself under the covers and vomit.

When you get divorced, people turn stupid and assume you’ll go out with anyone else who just happens to be single. And if they just happen to be divorced too, well then it must be a match made in heaven.  It’s comparable to “oh, you’re gay?!? I have a gay single friend…you guys should go out, you’ll be perfect together!”.  So here I am, single and not ready to mingle, and the set ups are starting.  My mom is canvasing her building for eligible bachelors, my friends are scrolling through contact lists looking for options. Friends of friends are telling me about great guys they know.  It was like I had my own little dedicated staff of matchmakers.  The first time out of the gate was with a really nice guy about 20 years my senior, bald, divorced, three kids and just not a whole lot in common.  “But Rachel, he’s super nice and has such nice teeth!”  “Yeah I’m looking to date, not buy a horse to breed, but thanks!” Um…next?

Then my supermodel friend (no, seriously, she’s really disgustingly gorgeous, skinny, towers over me, perfect eyebrows, turns heads when she walks into a room – bitch.  Oh, and she happens to be a super smart lawyer and one of the sweetest, most caring people you will ever meet in your life.) says she has someone she wants me to meet.  So we go to dinner – me, her, two other girlfriends and the guy.  He was cute,  successful, smart, also divorced with kids.  He sat at a table with us like he was head of the harem.  We had great food, drinks, awesome conversation and atmosphere.  And by we, I mean me, and the two other rejects.  Because it was like we were wearing invisibility cloaks a la Harry Potter (yes I just made a Harry Potter reference) and we were on our own little lady date. The guy would have eaten dog shit out of supermodel friend’s hand if she tried to feed it to him.  He wanted nothing to do with us.  And the best part is, that she was the only one at the table who’s married – very happily and not interested in feeding him dog shit.  Note to self: don’t ever allow supermodel friends to be part of an elaborate set up.

I briefly reconnected with an old friend from many moons ago.We had never dated each other, but found ourselves both divorced and looking to have fun and decided to go out.

I stressed out about going out on dates.  I sent my friends selfies (before it was even a thing) of me in different outfits to garner approval.  Marni came over one night and it was just like a scene out of a chick flick with a fun fashion show montage and Girls Just Wanna Have Fun playing in the background as we both giggle and sip wine.  Except my room looked like a bomb went off with clothes strewn everywhere, I was ripping outfits off cursing, there was no music, I was sweating and crying and I needed a Xanax.  Marni was spraying my clothes with perfume and inspecting my entire body like I was on a casting call for a Dove deodorant commercial where they are all in bras showing off their armpits. I hated it.

Within weeks the hard sell from my friends to try online dating began.

Now let me be clear, I have no issues with the idea of online dating. I actually think it’s genius.  I was just completely intimidated. I had a ton of relevant real-life examples of successful relationships and even marriages that were born out of people trolling for ass online.

Fine I’ll try it.  I logged on to Match.com and started to fill out my adult dating profile, added some pictures and sat there unable to hit the button to make it go live. I left it up on my computer screen, stared at it blankly and avoided it like Costco in Boca on a Sunday.  Then I grew some balls and did it…and simultaneously got nauseous.

Within a minute (that’s actually being generous) it was like I was sitting in front of a slot machine in Vegas. Shit started flashing, people are “winking” at me, instant messages are popping up I’m seeing ads for “no strings dating,” I have emails in an inbox I didn’t even know existed, and I think I forgot to breathe for a couple of minutes.  Yep….I was fresh meat and the men of Match were pouncing.  I promptly closed my laptop and pretended for a brief moment this wasn’t my life.

This is just one example of what went on and it’s by no means one of the most ridiculous ones.  Identifying information has been removed because I’m not a complete bitch.

When I had a chance to absorb the situation, I decided to go back in with an open mind.  I started perusing the list of potential suitors.  I learned a lot:

So then I decided I had a few options here:

I really needed to rally and give this a shot. I am not a quitter and I was determined to see what all the fuss was about. I actually consulted some people in my life who I refer to as “Power Daters” (ahem, you know who you are).  They literally juggle multiple sites and book dates like it’s their job.  I asked about best practices, tips and tricks.  I started engaging in conversations with some guys and looked at it as nothing more than an opportunity to flex my flirting muscles, which had severely atrophied over the last decade or so. I was in training like Rocky Balboa and getting back into shape to take on the dating scene.

Then I got a wink from another guy.  He looked cute and he had no face tattoos or Ed Hardy clothing, so I winked back.  Winks turned into emails – like novels of emails back and forth. I read them aloud to my work wife Lorin. We both giggled and waited for the next one. (Editor’s Note: I am super close with my girlfriends. Do not send me anything in email or text that you don’t expect me to forward screen shots of.  You’ve been warned.)   The emails turned into texts. Texts turned into phone calls. We quickly realized we had a mutual friend and once I confirmed he wasn’t an unemployed ax murderer, there was a 1st date.

I should probably also tell you, in the interest of full disclosure,  that up to the wink from the inkless-faced man, all of the above happened in a 48-hour span.  I never logged back in after the emails between us started.  I was in and out fairly unscathed.  He was the first, last and only actual Match date I went on- and he only cost $62, and I’m Jewish so I love a bargain.

We will celebrate a year together in June and are currently discussing our ideas to pitch for a match.com commercial. (mostly joking) 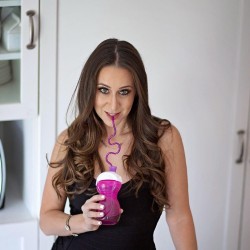 The “adult situations” that get those warnings

“Hey, I think we’re done,” has fewer words a

This is straight truth, people. On change-the-sh

I think I must have looked like this when I tried

So this is way too close to elementary-school math

The kids says this right in front of my mother-in-

Also known as the most annoying question after “

That guy would get so lucky. please dm for credi

And this realization is my Valentine’s gift to y

It’s amazing what a few extra ingredients can do

I need a mom stand-in, please! Actors get stunt do

Somehow I imagined a much more glamorous kind of l

They had to climb uphill both ways you know! Plea

Do your kids load the dishwasher or just put their