Ridiculous Video! Facts About Pregnancy and Birth Past, Present, and Future

Our Ridiculous Version: “Facts about Pregnancy and Birth, Past, Present, and Future.”

Leave it to us to make a video that involves a Lady Doctor, Nervous Preggo Lady, and Two Stressed-Out, Tired Veteran Mamas as the Ghost of Pregnancy Past and Future! We shot this ridiculous video as part of YouTube and Whohaha’s Women in Comedy Program. Hope you enjoy! 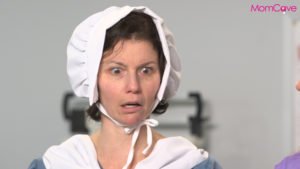 –Do you know women used to be knocked-out for birth? My husband’s grandmother has NO MEMORY of the births of her four children, due to a defunct practice known as “Twilight Sleep.”

Twilight sleep (English translation of the German word Dämmerschlaf) is an amnesic condition characterized by insensitivity to pain without loss of consciousness, induced by an injection of morphine and scopolamine, especially to relieve the pain of childbirth. –Wikipedia

–Did you know that you had to get off to have a baby? Well, that’s what they believed in Renaissance England. Doctors mistakenly believed that in order to get pregnant, a woman had to orgasm. I don’t see this being a terrible thing for most marriages. 😉

–What do you think they did before formula? Wet nurses were women that breastfed babies who were not their own. Whether it was because the birth mom died, had no milk, or was just too busy being the Queen of England, wet nurses were common even as recently as the 1940s. I have a close relative who was wet-nursed in the Southern USA!

–Don’t you wish you were pregnant in Japan? In Japan, an expecting woman can be issued a “badge” of pregnancy to signal to fellow commuters that she needs a seat on the train!

–Would you be surprised to know that the USA ranks among the worst countries in the Western world for maternal death rate, with about 14 deaths per every 100,000 live births. With just three deaths per 100,000 live births, Greece, Iceland, Poland, and Finland tied for the lowest. (THAT IS REALLY RIDICULOUS!)

–Have you ever wondered if babies emoted in the womb? A study shows that babies as early as 28 weeks cry while still inside mama!

–Ever wonder about an artificial uterus? It’s a thing!

–Think skipping traditional birth would be heaven? As hellish and painful as they were, I’d never want to skip the birthing of my children. But a growing number of obstetricians choose elective cesareans, not because they are too “posh to push” but because they feel it’s the safest method.

–Do you know there’s a whole sub-genre of fiction about men giving birth? Crazy, right?

Behind the Scenes Photos

Jen surveys the scene and set up

That’s just how you feel now. Especially if you

We didn’t even have the concept of “water bott

Meet @dadmann_walking one of my fave IG accounts.